A series where we chat to some inspirational women of the Automotive Industry here in the UK, as we celebrate one of the most important days of the year this month – International Women’s Day, who’s theme this year is to Break the Bias – Championing for a world free of bias, stereotypes, and discrimination.

So, let’s chat with some of the women breaking the bias in the Automotive Industry and kicking off our new series – Live More. Moments – with the Women powering the Automotive industry.

Rebecca: Hi, I’m Rebecca Chaplin and I’m proud to be presenting Motors.co.uk’s new series ‘Live More Moments’, a series where our amazing guests share with us their car moments, memories from their first motor, nostalgic childhood road trips and the must-haves for their existing or future cars to enable them to Live More.

In our first series, we’re chatting to some inspirational women of the automotive industry here in the UK as we celebrate one of the most important days of the year this month – International Women’s Day, whose theme this year is ‘break the bias’, championing for a world free of bias, stereotypes and discrimination. So let’s chat with some of the women breaking the bias in the automotive industry.

Today, I am speaking to someone who is engrossed in the classic car market and has been for many years. She is someone who rose to fame in the industry following her role on TV show ‘Bangers and Cash’ where she worked with the car auction Mathewsons. She has been setting up on her own, though, with a new classic car auction platform Evoke Classics, where she is now sales director. Please welcome my guest today for Motors.co.uk’s Live More Moments, Sarah Crabtree – welcome Sarah! How are you?

Rebecca: So if we can crack on with the questions, can you tell me a bit about your career and how you got into classic car auctions?

Sarah: Good question! I’ve always had an interest in classic cars, having been brought up by a father who owned lots of British Leyland cars and my older brother who dragged me from scrapyard to scrapyard – I couldn’t really escape being into cars and motorcycles. It’s always been there. Then the chance came up to work for Mathewsons and I grabbed it with both hands and ran with it. Just being in the right place at the right time.

Rebecca: Last year you went to Evoke Classics – can you explain a bit about what you’re doing there?

Sarah: Yeah that’s right. So I teamed up with Evoke Classics a good year ago. We started to talk and we’ve rebranded their company with me being the face – unfortunately! We’ve gone down the online route. Over the last few years, people have become more comfortable with buying cars online and just pressing a button to buy anything. So it seemed to be the next step within the auction industry and a lot of people have followed this route. Yeah, we ran with it and we’re all very excited. The team are just hyper all the time, it’s great! Really really good and lots of good vibes.

Rebecca: Having been in the classic car world for such a long time, have you ever felt that you’re a woman in a man’s world or has that never been an issue?

Sarah: Of course. Thankfully not hugely. I suppose when I was working for Mathewsons it was a little bit different because I was office-based and I suppose that people coming into the environment expect to see a female in an office role. So that’s quite good. But I suppose there were times when you’d feed information to a customer and their response would be ‘well can’t I talk to one of the lads?’ as if what I was saying wasn’t true or that I didn’t know what I was talking about. So you would get that but in general people were good.

Rebecca: With us celebrating International Women’s Day this month, do you think that there is anything that the automotive industry needs to be talking about on that front?

Sarah: Yeah absolutely. Like I just mentioned, girls, women, females are coming up against brick walls and time and time again I get emails – one only last week – where a girl who was only 23 who was really struggling to get into the automotive industry. She gets lots of negative feedback, so she’s trying to get into the more mechanic side of the industry and she is really struggling. She gets told, ‘sorry, we’re looking for a lad’. Come on guys out there! Get with it, we’re in 2022. Give girls a chance

Rebecca: Definitely. That’s terrible to hear. But it must be nice to get emails like that – you are definitely a positive role model.

Sarah: It’s fantastic to receive but sad to see an email like that. I want to give them inspiration. But you can’t give career advice because they’ve already tried. They’ve gone out there and got themselves in people’s faces and they’re getting negative feedback. I’m then on the back step but trying to give them some inspiration really, because they’ve already come up against it. It’s quite sad, but I hopefully spur them on.

Rebecca: From the looks of it you’ve driven plenty of classics over the years, but what do you drive yourself?

Sarah: Currently my classic is a Morris Ital, which I know does get frowned upon by lots of people. It’s not everybody’s choice, but it wouldn’t do for us all to be the same!

Rebecca: How does that fit into your lifestyle?

Sarah: Yeah, it fits into my lifestyle perfectly, it really does. I think that going to events – and last year I spent a lot of time going to classic events without a classic – and it’s just a different ball game. When you attend with a classic, you get a new lease of life and people want to come and talk to you. People want to hear about the car, look at the car and tell you their stories about the Ital that they owned when they were younger. It’s great. It opens up a whole new conversation with people.

Rebecca: I saw you recently did an eight-day road trip in a Fiat Panda – how was that? It was around Italy too wasn’t it?

Sarah: It was amazing. It was probably the best thing that I did last year. It was a crazy idea. One of my close friends had purchased the Panda during the pandemic and we just couldn’t get over there. A little window of opportunity opened up and they said ‘do you want to come with me, let’s go and get this Panda and we’ll just drive it back?’. Yes of course! So we did that and it was brilliant, phenomenal. The little Panda did amazingly, it was really slow-going – sort of doing 55mph max all the way back from Malta – which is where we collected it from. But it was great. And the amount of people that we interacted with because of that little car! That was just worth it.

Rebecca: Is there any car that you’d like to get your hands on and do a road trip with?

Sarah: Yeah there are too many cars really! I’ve got a huge bucket list of vehicles. I’d love to own a Reliant Scimitar, just because, again, they’re a little bit of an underdog and I’m a massive advocate of the underdog in the motoring world. Hence, owning a Morris. Yeah, a Scimitar and take it anywhere really. I love Scotland and I do the west coast of Scotland a lot in a modern car, so it’d be lovely to take a classic up there – as long as it was reliable.

Rebecca: You are 100% a woman after my own heart. Thank you so much for talking to us today about your cars and you career.

Sarah: You’re very welcome. Lovely to speak to you.

Rebecca: Thank you to everyone who has watched today. This is actually our last in the series of the Motors.co.uk Live More Moments – Women powering the automotive industry. We hope that you have enjoyed it as much as we have, so we’ll see you in the future I’m sure. 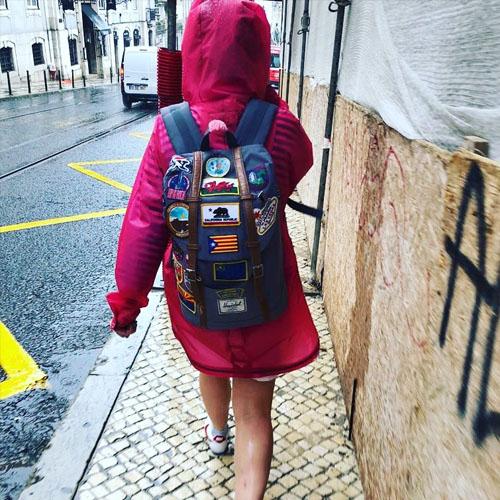