The stars of the 2018 Paris Motor Show

The Paris Motor Show is a firm favourite for car manufacturers on the automotive event calendar, and is a popular choice for carmakers to unveil their new metal.

While a large number of cars were revealed ahead of the event, there were a few reveals, too.

Here we round up the 10 best cars to be revealed at this year’s Paris Motor Show. BMW had heavily teased its new 3 Series ahead of Paris, but it was only today when the covers were officially pulled off the new executive car. It looks like a shrunken 5 Series (no bad thing) and features a new ‘Intelligent Personal Assistant’, which can carry out a number of voice control functions, and can even hold a conversation with you. While the e-Niro had already been unveiled, it made its European debut at Paris. Offering an impressive 301-mile electric range, the fully electric crossover is an important model for Kia, and looks to rival the best-selling Nissan Leaf and new Hyundai Kona Electric. It was unveiled alongside the new Proceed shooting brake, and a new sporty Ceed GT Line. Renault unveiled the K-ZE in the French capital. It’s an electric crossover designed for all markets around the globe. Based on the Indian market Kwid, the K-ZE will not initially be available in Europe, but it is expected to be rolled out to Europe in 2020. It appeared on the Renault stand next to the ‘EZ-Ultimo’ – a fully autonomous concept car. 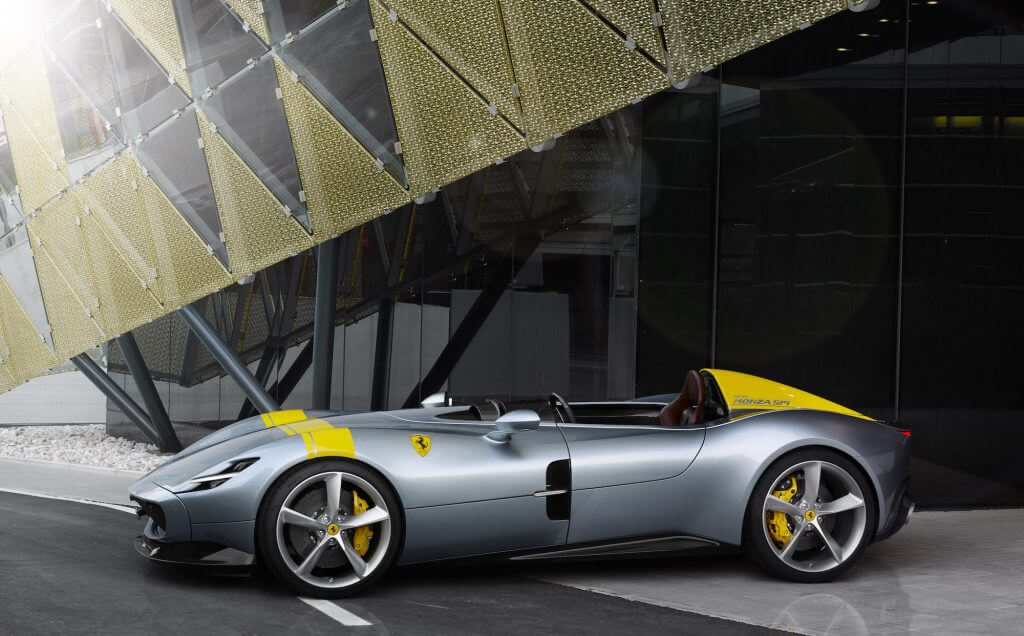 The Monza SP1 and SP2 limited edition models are designed for the most elite of Ferrari’s loyal customers, and are the first models to come out of Ferrari’s newly-established ‘Icona’ range, which looks to celebrate the best cars from Ferrari’s history. VinFast is a completely new brand, and will become Vietnam’s first homegrown volume car manufacturer. It unveiled its first two models at Paris – the LUX A2.0 saloon and LUX SA2.0 SUV. David Beckham even made an appearance to reveal the cars at the show stand, with the cars set to enter production from 2019. Alongside the unveil of the new i30 Fastback N – a sleeker version of Hyundai’s popular hot hatch – the firm announced an i30 N ‘N Option’ show car, which showcases 25 exterior and interior customisation options which are set to become available when ‘N Options’ launches in the near future. To mark 70 years of Porsche earlier in the year, the firm revealed a Speedster, but only as a concept. However, such was the enthusiasm towards the concept, Porsche has decided to put the Speedster into production. Exactly 1,948 will be built (the exact number for the year Porsche was founded). The DS 3 Crossback is an important car for DS, as it’s not only the firm’s second standalone product, but it will also be DS’s first fully electric car, as the brand looks to transform itself into an electrified vehicle manufacturer. That said, petrol and diesel variants will also be offered, too. The Kodiaq vRS was perhaps the most heavily teased car of all at this year’s Paris Motor Show. With a 237bhp diesel engine powering the Kodiaq, the performance SUV is able to accelerate from 0-60mph in 6.8 seconds and also holds the record or the fastest seven-seater around the Nürburgring. It’s Skoda’s first performance SUV, and it likely won’t be the last… Peugeot harked back to its past with the unveiling of its latest concept car – the e-Legend. The concept is a fully autonomous electric car, with styling similar to Peugeot’s iconic 504 coupe. But it’s not all for show, with Peugeot’s CEO, Jean-Phillipe Imparato, describing the car as a “vision for a brand actively focused on an optimistic and ultra-desirable future”.